As part of a project to find and organise small parts such as lego I’ve designed and built some RS485 addressable matrix displays.  These have a simple protocol to set an address (1 character) for each module and turn on one LED at a time in the matrix.   They are intended to be chained together.   There is a small step-down power supply on each board that drop the 12-24v power down to 5V using the LM2574 switching regulator.   Each board has a 4pin mini din connector which has the twisted pair signal, ground and power. 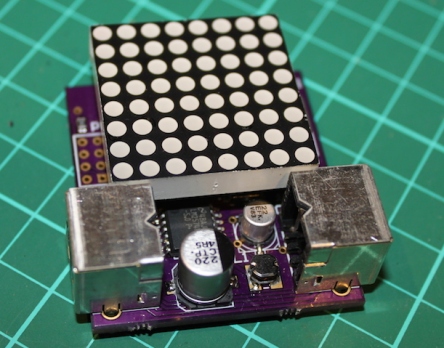 The project which will use these boards is a web application that can store where parts are stored in storage units.  The idea is that one LED in the matrix will light up to indicate the position of a part as you move through a pick list in the web app.  As only one LED lights up at a time it is possible to drive the single LED from the ATMega processor.

I originally wrote the server side project that stores where parts are in node.js, angular and MongoDB, however I have recently moved this to a Spring cloud application (mainly as a learning exercise).  The code is available at node or Spring.   The PCB layout was done in circuit maker and I will post it in a follow on post.   I am yet to check in the ATMega (Arduino) code but will package this up soon.

I’m currently updating all of this and also building some scales (connected on RS485) to weigh parts.   I’ll post an update in the next few weeks along with some instructions on how to get the code up and running.